YOU Can Help Win the Strike 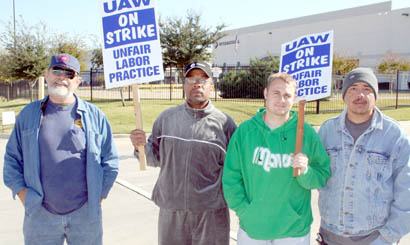 Members of UAW 119 are picketing International

Ray Edmondson, who has been on strike since October, appeared on KNON radio's "Workers Beat" program on December 12. He talked about how hard it is to be on strike with Christmas coming. One of the people listening was a friend of his who owns a business in Red Oak. She called and offered to set up a "Christmas Toy Drive" for UAW 119, and she pledged the first $500. She was especially concerned because she said one of the strikers was run over and killed during the strike. He left a wife and two small children facing the most dismal of all holiday seasons! Anyone can donate by going to the bottom of the page at www.serenitymortgage.net. For more information, call 972-576-8500.

In the last week, several passersby at the picket line, 4038 Rock Quarry in Dallas (Oak Cliff), have stopped to offer support. UAW Local 276 brought them Christmas hams. UAW Local 848 invited the strikers to a Christmas dinner on December 13 and a Children's Christmas Party on December 15.

Being on strike is a lonely and alienating experience. Please go by the picket lines and show your solidarity!

Even if the strike is settled, these families have had to go two months with only their meager strike pay. Their children deserve better this Christmas!

An article in Automotive News says that management and union representatives resumed negotiations on November 2. It says that there are about 4,000 UAW members on strike in six states. Navstar, the parent company, had an estimated worldwide original-equipment automotive parts sales of $3.40 billion in 2006.