Both Houston and Dallas activists targeted Senator John Cornyn with protests on the first-in-decades American general strike May 1. Cornyn has responsibility for immigration issues on the Senate Judiciary Committee, which is supposed to bring out a bill that will be matched with HR4437, the infamous Sensenbrenner Bill that passed the House of Representatives in December. In public statements, Cornyn seems to agree with Sensenbrenner that the only action the Congress should take is to further criminalize undocumented workers and anybody who would help them.

The League of United Latin American Citizens (LULAC) took the lead in Dallas. Activities began at noon with a spirited rally at Cornyn's office building in far North Dallas. Even though the place was hard to find, in an area that most workers never go, and at held at the unwieldy hour of noon, about 250 wildly chanting protesters gathered.

"Today we march, tomorrow we vote!" was a favorite slogan on the many hand-made picket signs. Others warned, "Cornyn, we'll remember in November!"

Domingo Garcia, main organizer of the picket and other events, told this reporter that people had already begun gathering at the Dallas City Hall Plaza for another rally that was supposed to begin 4 and 1/2 hours later! It is hard to determine how many people joined the protest at City Hall. There were around 3,000 at 5 PM, but many had already come and gone. Nearly everybody had an American flag or other patriotic symbols. Margarita Alvarez and Maria Dominguez, immigrants' rights leaders from the 1980s on, were among the speakers. The rally ended with the national anthem, sung in English.

High school students, who had actually sparked all the protests with big walkouts in late March, rallied with around 3000 people in Kiest Park. A religious vigil at the Kennedy Memorial finished off the days' activities. Although they received no recognition for their efforts, two unions, UFCW and UNITE-HERE, worked to contact employers and union members to assure them that the union would back them to the full legal extent. Many workplaces were shut down, and many crews worked shorthanded on May 1. 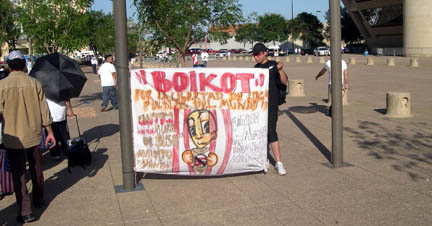 Activists speculated as to why turnout on May 1 was lower than it had been on at the Sunday downtown march on April 9. Some initially thought that the new aggressive policies of the Immigration and Customs Enforcement (ICE) agency and their raids on IFCO company facilities may have dampened enthusiasm for protest. However, the Houston turnout of 20-30,000 was much larger than their Monday, April 10, march. Since the main IFCO raid took place in Houston, its effect did not seem to scare the protesters. Big cities around the nation reported turnouts as large or larger than the April 9-10 events, so the drop in Dallas participation remains unexplained at this time.

In anticipation of firings, immigrants' rights activists around the country had already begun working and planning to meet the challenge. The Change to Win Coalition, one of the two big labor federations in America, filed an Unfair Labor Practices (ULP) charge with the National Labor Relations Board. People who are fired can join their names to this national action. Jobs with Justice convened a national phone conference before May 1, and another was held on May 3rd. Some of the organizations reported that they had done a great deal of work before May 1 in advising both employers and employees of their situation. They are currently gathering the names of firees along with their employers and employers' addresses. They intend to approach the employers who fired employees unfairly for protesting. Some have already re-hired people they victimized during the April 9-10 events. Others, faced with batteries of lawyers and the union ULP, may reconsider without any public attention being given. The group plans to phone conference again on May 5 to evaluate the situation and plan activities.

It was pointed out that companies who are not particularly vulnerable to public pressure in one city may well be sensitive in another; consequently, a nation-wide strategy may bring them around. Watch this page for more developments.