At least 3 Texas activists attended the National Alliance for Retired Americans (ARA) convention in the nation's capital September 5-8. The thrust of the meeting was to try to change our government representatives to end the ongoing devastation and planned destruction of seniors' pensions, health care, and Social Security.

The organization was begun five years ago by major international unions. It has grown from less than a million to 3.6 million, with tens of thousands receiving regular

information from their organization. Texas was the 26th state to get a charter this year. At the convention, some of the Internationals held a special breakfast for their own retirees. The United Auto Workers' breakfast was attended by the new national retirees' rep, Linda Lash and by former International President Owen Bieber. She is pictured while speaking to the group.

The retiree organization held a big rally to save Social Security on the Capitol lawn. Afterward, they went into Capitol buildings to lobby their political representatives. There, they ran into other union groups who were lobbying for various other causes, such as the Employee Free Choice Act. For more complete coverage on the retiree convention, click here. 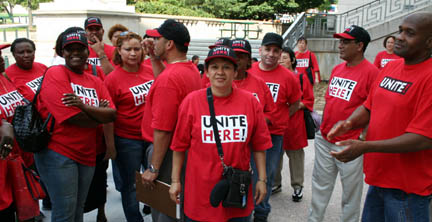