Senior Power is Erupting in America

The National Alliance for Retired Americans held its Legislative Conference September 4-7 at the Washington Hilton in Washington DC. Over 600 delegates, including 10 from Texas, sharpened their political skills with workshops and a dynamic speakers list that included Senator Hillary Clinton and AFL-CIO President John Sweeney.

The 600 or so delegates to the conference also spent half a day climbing around Capitol Hill to visit their congresspersons. Although we talked about many issues, the hottest one was the SCHIP (Children's health care insurance) bill approved by the House. The Senate had approved a much less effective version, and the two versions were in committee. The ARA position was that the Senate version should come up to the House version, which reversed some of the worst parts of the Medicare Drug bill of 2003. 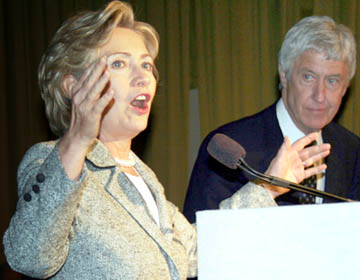 President George Kourpias described the ARA: "The Alliance stands alone as a powerful, progressive grassroots army for retirees. What we will do this week is begin a 14 month-long effort, leading up to the 2008 elections, to provide greater training than ever on community activism, lobbying, communications, and organizing skills. This work will continue through our four regional Alliance meetings in 2008, plus all of your state conventions. Our regional meetings will be in Las Vegas, St Louis, Orlando, and Philadelphia. ...Brothers and sisters, I can tell you from the bottom of my heart that the Alliance for Retired Americans will be at the forefront of guaranteeing health care for all in this country!"

The pure power and enthusiasm of the senior's movement in America is extremely impressive. Trends within the labor movement as a whole, such as labor's role in the growing ideological debate, are even more important.