For Halloween, Dallas activists joined a nationwide effort to raise money for health care insurance for Wal-Mart employees. They sold candy in front of two Wal-Mart retail facilities. They also distributed literature explaining that this tight-fisted employer has exploited their own workers while bringing down the wages and benefits of everyone else concerned.

Information is posted at http://www.wakeupwalmart.com.

The web site denounces Wal-Mart's recent announcement of a watered-down employee health care plan, their support for Congressman Tom DeLay, and the cost of welfare programs for Wal-Mart's employees. 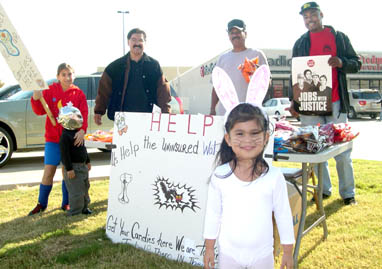