Our Jobs with Justice "Stop Corporate Greed" sign joined about a hundred other signs and banners at a protest against Vice President Dick Cheney outside the Hyatt Regency Hotel in downtown Dallas on the morning of November 2. Cheney was telling a group of supporters that the United States needs to keep up the occupation of Iraq and add another project: invading Iran. Protesters outside were chanting, "Are you crazy?"

Even though activists from the Dallas Peace Center, a Jobs with Justice member organization, organized the action primarily for anti-war reasons, a goodly number of young environmentalists joined in. The Jobs with Justice position was explained over a bullhorn thusly: war is only carried out against companies that refuse to sign so-called "free trade" agreements with American corporations. If Iraq, Afganistan, or Iran had signed one, they wouldn't be threatened today. In other words, gobblelization is the root cause of war.

This simple fact was explained very thoroughly over KNON radio the previous Wednesday by Marc Jacobson, Director of the Texas Fair Trade Coalition. Jacobson also made it clear that the root cause of what is now being called the "immigration problem" is also gobblelization. Before the "North American Free Trade Agreement" (NAFTA) was passed, Mexican emigration into the United States was actually declining. It has mushroomed ever since, because NAFTA is destroying the (primarily agricultural) livelihoods of low-income Mexicans. They are forced to emigrate! At the Cheney protest, Jobs with Justice asked everyone to call their political representatives to urge a "no" vote on the upcoming "free trade agreement" with Peru.

North Texas Jobs with Justice has made gobblelization and its demonic offspring, unprecedented immigration from poor countries to industrialized nations, its top priority for years. Another good reason for protesting against Vice President Cheney is the fact that the United States is spending itself into the poorhouse with military adventures while domestic problems go begging for money. Our work for health care reform, including health insurance for children, is currently being stymied by Cheney and the Bush Administration because they claim there isn't any money for it! 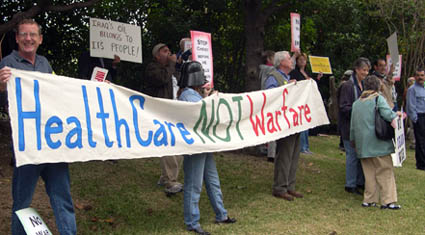