The Dallas AFL-CIO has made these endorsements in the local elections for May 7:

All members of affiliated unions are welcome to come to the meetings at 7:30 PM on the third Thursday of the month. At the April 21 meeting, there was a brief discussion of changes that may happen at the National AFL-CIO convention in July.

All delegates were asked to help the Letter Carriers (NALC) with their national food drive on May 14. We can put cans on our mailboxes, and we can make out checks to "North Texas Food Bank."

Three trustees were re-elected to 2 year terms: Electrician Philip Parker, Teacher Harley Hiscox, and Aerospace Worker GeneLantz. A new delegate from the American Federation of Government Employees, Kevin Tinker, was sworn in. Tinker has helped delegates from other unions understand the attacks being made against the rights of government employees.

It was announced that Workers Memorial Day this year will primarily be celebrated in Texas City, where a British Petroleum refinery blew up with many worker fatalities. Lee Medley, legislative rep from the local union there, is to appear on the "Workers Beat" program at 8 AM on April 27 at 89.3 FM.

Joe Hall of the Building Trades spoke on health care legislation. He said that it should be dealt with as a human right. There was a good general discussion of legislative and political issues facing the labor movement. Endorsed candidate Pauline Medrano, whose father and brother were both union leaders, addressed the union representatives. 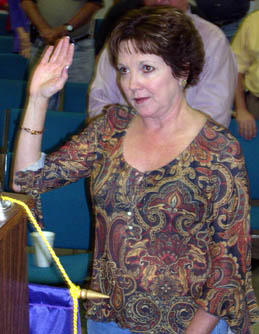 Gwen Dunivent, an outstanding labor delegate from the Transport Workers Union, Local 556, was sworn in on the new Executive Board. She will be traveling to Washington to study for her college degree with the AFL-CIO soon. 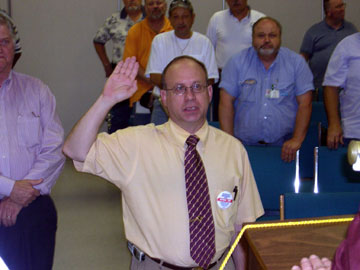 Kevin Tinker of the American Federation of Government Employees, was sworn in as a new delegate to the Central Labor Council.