The Texas AFL-CIO helds its convention August 1-4 in Corpus Christi. Progressive leader Becky Moeller, a great friend of Jobs with Justice who attended the recent U.S. Social Forum in Atlanta, was elected President. The organization continued its progressive trend with a number of resolutions, including one that came up from the San Antonio Central Labor Council demanding single-payer universal health care!

Hobie Hukill, a North Texas Jobs with Justice activist from the American Federation of Teachers, helped with the health care resolution. Both he and CWA Legislative Rep Howard Haraldson are expected at the August 9 meeting. It will give North Texas activists an opportunity to hear about the newest developments in Texas labor. Please join us at 7 PM on each second Wednesday at Oak Cliff Methodist Church, 547 E Jefferson in old Oak Cliff. 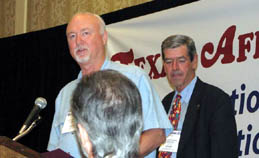