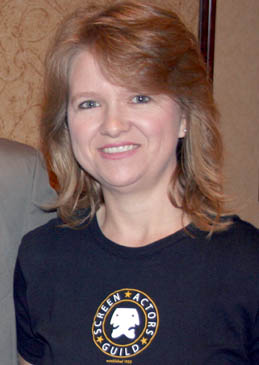 was "Unions in the Entertainment Industry."

Host Gene Lantz was immediately impressed with the realization to our brothers and sisters in the fine arts have problems very similar to those in the manufacturing sector. Dowell talked about the core problem that put the Screen Writers' Guild out on strike. The bosses are shifting more and more of their product toward television, DVD sales, and the internet. At the same time, they expect the writers to continue at the same salary that they received for the original TV or movie presentation.

In manufacturing, the exact same problem is called "new technology." When the bosses bring a new machine into the shop, they expect to take all the profits generated while the workers get nothing -- or they get laid off! Unions in manufacturing have constant problems caused by the introduction of new technology. Another easy example comes from the occupation of trash hauling. Most of us remember when a trash team consisted of at least three people, but today's automation allows for only one person -- the person who drives the truck and operates all the pickup and compacting equipment. New technology came in, but it only helped the bosses unless the union was able to negotiate something for the workers. The same is true of the writers.

Dowell revealed another great similarity when she talked about how the movie industry tends to move from one state or nation to another depending on how cheap the costs of production are, or depending on how much of a subsidy they can get from state or local governments. This problem is known throughout the union movement as "outsourcing." In other words, our jobs are moved around to suit the bosses with no consideration of the effect on the workers, unless, again, the union can do something about it.

Dowell said that the degree of solidarity being shown within the entertainment industry has been very encouraging. She said that all workers should study and understand the issues in this important battle.

Meanwhile, AFL-CIO President John Sweeney has weighed in with this statement on the writers' strike:

"The AFL-CIO proudly supports our fellow AFL-CIO union, the Writers Guild of America, East and its sister union, the Writers Guild of America, West in their current fight to win a fair contract for their striking television and screenwriter members. Their members are our nation's storytellers; their imagination and freedom of expression are national treasures. They are in the struggle of their creative lives, fighting for a rightful share of revenues from the internet, news media, and digital technologies of the 21st Century. They simply want what all working men and women want and deserve - to be compensated fairly and respectfully for their work and their contributions to their employers. We proudly stand beside the Writers Guilds in their efforts and join them in solidarity."