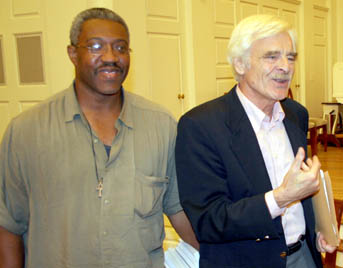 Internationally famous theologian Ullrich Duchrow and his wife Ullrica talked to Dallas audiences in the first week of October, 2007. Duchrow is a professor at the University of Heidelberg and founder of "Kairos Europa," an international ecumenical grassroots organization. The Duchrows are regularly featured at international religious gatherings in Europe, South America, and Africa. On radio KNON on October 3, the Duchrows focused in on the world economic crisis being caused by big transnational corporations as they gobble up the resources and manpower of non-industrialized countries. In Europe, the Duchrows said, progressive churches regularly work with the labor union movement on unfair trade pacts similar to the "NAFTA" arrangement here.

Duchrow was joined by seven other major theologians during two presentations at Southern Methodist University on October 4th. Knon listeners like German Alexander and Jobs with Justice activists joined the academicians at Perkins Chapel. Professor Duchrow presented a major paper on what is wrong in our international economic relations. At one point, he explained that social and economic relations are like cells in a living organism. When certain cells (transnational corporations) begin to grow at the expense of the other cells, he said, "We call that cancer!" As the diseased cells grow larger, they kill the other cells, then the host, and f inally, themselves.

Among the other theologians on the panel were Marc Ellis from Baylor in Waco, Anne Joh from Phillips Theological Seminary, Namsoon Kang from Brite Divinity School, Mark Lewis Taylor of Princeton Theological Seminary, Hjamil Martinez Vasquez from Texas Christian University, and Sze Kar Wan from SMU. Distinguished theologians such as Abraham Smith and Evelyn Parker were in the audience.

Dr Joerg Rieger of SMU, author of "Christ and Empire," hosted the event. The panel talked about human misery that results from the corporations' exploitation. They lamented the ongoing violence in Iraq and in Palestine, both of which stemmed from the same set of problems they were discussing under the general heading of "Religion and Empire." They called for more religious leaders to stand up and speak out.

Duchrow is author of a number of books. His latest is entitled "Property for People, Not for Profit: Alternatives to the Global Tyranny of Capital." He told his SMU audience, "People are suffering from the dominant powers and dominant ideologies of the world." His message for American churchmen was clear, "Churches can only live up to their biblical calling by joining the progressive forces." He concluded, "Another world is possible. Stop the cancer. Nurture life!"