Fight for the right to organize

On June 19, American democracy reaches a crossroads. The agonizing decline of American rights and freedoms is being challenged in the U.S. Senate by the Employee Free Choice Act, which passed the U.S. House resoundingly. Congresswoman Eddie Bernice Johnson was a co-sponsor. If the Act becomes law, America may see a new flourishing of rights and freedoms. If it fails, the stakes become even more crucial, and the fight will burn brighter.

The Senate vote may come as early as June 20. Across the nation and in Washington DC, progressive forces are turning out in public demonstrations on the day before. Dallas progressives will gather at 7 PM in the Fellowship Hall behind Munger Place United Methodist Church, 5200 Bryan at Munger in East Dallas.

At the church, a panel of experts will hear testimony from working people who have been trying to organize under the present degenerating system of laws. The panelists and the audience will also be able to deliver their own experiences and opinions. Senator Cornyn has declined his invitation, but hopefully an assistant might come.

Everyone is invited to contact their senators. One way to do it is through our home page. Another way is:

Attorney Ed Cloutman, who is well known to Dallas progressives as the original filer of the Dallas school desegregation case. He has years of experience with labor law and has represented a number of unions who were forced to file suit against employers because of unfair labor practices. Contact 214-939-98222

Hobie Hukill, an Executive Board member of the Alliance for Excellence in Education. Contact: (214) 543-4698

Sister Nancy Sullivan of the Dallas Diocese. She specializes in justice issues. Contact: 214-528-2240

A number of area residents will provide testimony about their first hand experiences in trying to exercise our right to organize. Among them will be members of:

As we fight for passage of the Employee Free Choice Act (S. 1041) in the Senate in coming days, we all are keeping in mind the bottom line for passage of the bill: America's workers. North Texas Jobs with Justice is dedicated to fighting for the Employee Free Choice Act from now until the day it becomes the law of the land. We will speak for it at every opportunity, we will petition for it, we will lobby for it, and we will work to organize a social movement to overcome all resistance! 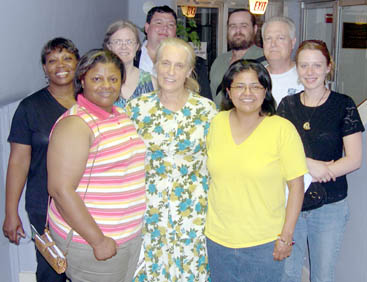