Activists demanding fair treatment for immigrant workers continue to organize public events, register voters, and build coalitions that will increase their overall political ability. On March 31, the "Mega March" Committee which claims responsibility for last years' history-making march, brought around 3,000 activists to the plaza of the Dallas City Hall. Corporate media coverage focused on comparing today's actions with larger ones in 2006, but they are drawing the wrong conclusions: The movement is not dying out, but deepening its roots throughout the body politic and expressing itself in different ways. 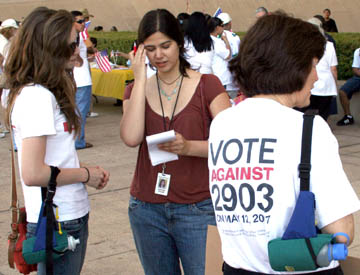 Voter registrars from the County Registration Office reported that they were doing a brisk business at City Hall. A number of activists were wearing the T-shirts that indicate that they are working in the Farmers' Branch area as elections approach there. Farmers' Branch citizens will have a chance to vote down the anti-immigrant resolution 2903 on May 12, and voter registration sweeps have been taking place every weekend.

Catholic Bishop Charles Grahmann was among the enthusiastic speakers at City Hall.

It is lilkely that the traditional "Cinco de Mayo" activities will be smaller this year, and intimidation of the Latino community by government agencies will be the reason. It does not mean that Mexican Americans, or anyone else, are less resolved to seek justice and dignity in the United States!