North Texas held its regular second-Wednesday meeting at 7 PM April 11 at the Oak Cliff Methodist Church. It would take pages to properly review the rich discussion of this amazing time in American history, but this short review will have to do.

The Employee Free Choice Act continues to be labor's most important legislative agenda. JwJ has been petitioning for two months and has turned in hundreds of name in hopes of moving Senator Cornyn to stop opposing workers' organizing rights. Issues of global justice continue to concern the group, as they have for the past decade. There are four so-called "trade" agreements pending congressional approval: Peru, Panama, Colombia and South Korea. As always, these secret pacts are nothing but corporate welfare and disasters for working people on both sides of every border. Government officials hope to pass all four of them without any oversight from the Congress under the "Fast Track" methods that have been in force since 2002. "Fast Track" itself faces a June 30 expiration date; consequently the fight to keep Congress from renewing it is the major battle before us. At the Texas level, the state legislature may have stymied Governor Perry's efforts to create a gigantic "Trans-Texas Corridor," at least for the time being.

Health Care continues to be a major area of worker concern. Jobs with Justice has been helping the National Nurses' Organizing Committee. They have a number of activities listed on www.nnoc.org and in our "coming events" section.

Our own Cesar Chavez breakfast celebration went well, as did the march in Ft Worth.

We had an extended discussion about what to do on May 5, "Cinco de Mayo." Ordinarily, we join two Autoworkers' locals in the Grand Prairie parade, which starts at Graff Chevrolet, around 1500 E Main, at 11 AM. There is an Oak Cliff parade as well. The problem is that most activists feel that the May 12 elections are extremely important, especially in Farmers Branch, where one of the most racist anti-immigrant propositions in the United States is on the ballot. Early voting will begin April 30; consequently, May 5 will be a big voting day! No vote was taken, but all activists are encouraged to participate in May 5 activities.

As it stands, we have only seven people considering attending the U.S. Social Forum in Atlanta June 27 to July 1. We have applied for scholarship money to pay part of the expenses, and we are awaiting word from national JwJ. We would like to have a lot more volunteers, even if they need financial help to attend. We will have a considerable fund-raising task to get a good delegation there.

Dr. Asam Salam amazed the meeting participants with her description of the treatment of detainees in the centers run by the Immigration and Customs Enforcement agency (ICE). Full information is on the internet. 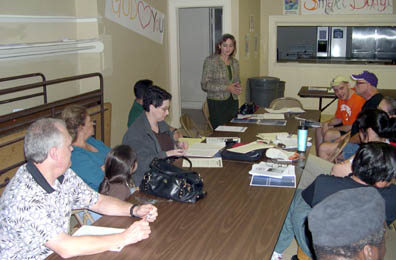 Dr. Salam said that almost anybody is likely to be thrown in a center, if there is the slightest question about their citizenship status: "If their case is in doubt, they will be put in those detention centers." Unfortunately, the centers have been privatized and are being run for profit: "It's not about trying to solve a problem it's about money." One of the corporations involved in ICE centers is the infamous Halliburton, she said.


Immigrant families are thrown into some facilities with actual criminals. They lack medical care, proper hygiene, and decent nutrition. She summarized,
"There is nothing human about those detention centers." Dr. Salam has a vigil at the Dallas federal building, 1100 Commerce, every week day from 9 AM to 4 PM. A few people are slowly beginning to find out about the issue and are joining her. She thanked Women in Black, Patricia Juarez, Rev Ronald White, Mrs Sylvana Alonzo, Reverend PeterJohnson, and Representative Rafael Anchia as spending time on the vigil. Mr Ralph Isnberg has backed this cause for the past three years, since his own wife suffered 52 days of detention. He says there has been no improvement in ICE treatment during those three years. 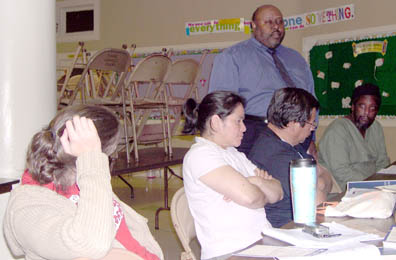 Reverend L. Charles Stovall had been invited as our principal speaker. He has been involved in Jobs with Justice since it began. He said, "When our forces are unified, our voices are magnified!" He went over some of the strengths of coalition building. Coalition members never lose the integrity of their primary group, but they look for those causes that different organizations and individuals have in common. The goals of national Jobs with Justice include the right to organize, health care, immigrant workers' rights, and global justice. "When you build coalitions, you build relations," he told the group.

Reverend Stovall said to expect a rally before long over Darrell Washington, who was shot March 22 by Dallas police.

Our meetings usually conclude with a "Round Robin" in which individual activists talk about what they are working on. Here are some of them::

ACORN is fighting for lower utililty bills and affordable housing. They have an event at 6 PM at the MLK Center, 2922 MLK Boulevard in Dallas

South Africans are suffering from gobblelization and economic apartheid. Trips are planned to Africa and to Cuba. Look for African Liberation activities May 26-27

Texas teachers had several victories in the state legislature, but adequate funding for schools is still a distant goal.

There would have been even more activities listed were it not that North Texas activists are working on democracy and election issues!