Dallas AFL-CIO Principal Officer Jim McCasland told the Labor Day breakfast audience that turnout was the highest in the history of the event. A large number of candidates celebrated with unionists from all over Dallas County. Jack Pennington of UA Local 100 merited the "Hero of Labor" award. Special recognition was given to the Jobs with Justice table, which had overflowed into a second table with religious leaders from several denominations. 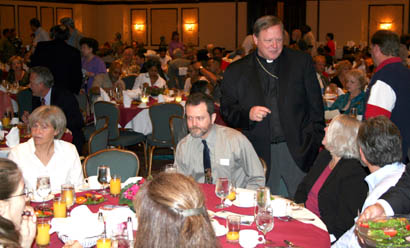 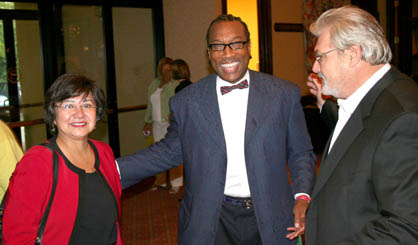 Nobody had time to be bored at the AFL-CIO breakfast. Even though it was a rainy day, more than 400 people enjoyed the event!

Immediately after the breakfast, Reverend L. Charles Stovall of Munger Place Methodist Church and Gene Lantz of Jobs with Justice rushed downtown to catch the last part of the immigrants' rights march called by ACORN and various civil rights organizations. About 300 marchers braved the rainy weather to walk from Guadalupe Cathedral, around the Kennedy Memorial, and to the Dallas City Hall for their rally. Speakers and entertainers were extremely upbeat and positive at this event.