"Move On" Group Pushes for Peace

Across the nation on August 28, groups of Americans carried out vigils for peace. The ethernet experts at www.moveon.org organized hundreds of simultaneous events. In Dallas, about 100 people gathered at the Kennedy Memorial downtown. Most of the program consisted of reverently listening to reports of American soldiers who had been killed in the Middle East. Several TV cameras were in evidence.

Pro-war financiers have commissioned a $15 million publicity plan to convince Americans to continue the war and occupation. Additionally, most politicians and virtually all of the corporate media have joined in to say that Americans should stake everything on the opinion of General Petraeus when he makes a report in mid-September. The August 28 actions were a good opportunity to expose the folly of continuing to listen to the top government leaders, their appointees, and their complicit media spokespersons. 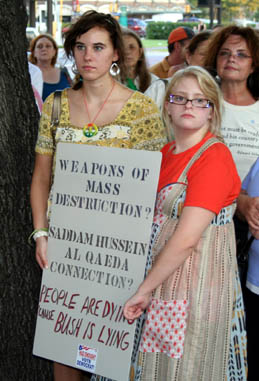 The Dallas crowd, like many at MoveOn events, were not people who have been protesting the war for sometime. Long-time activists like Johnny Wolf and Roger Kallenberg told me that they didn't personally recognize more than a dozen people there. A dozen was about how many I knew.

In nearby Arlington, MoveOn was able to get about 60 people together. They used an "open mike" format where activists gave their opinions of the situation and made recommendations as to what needs to happen next. Rain limited the Houston action to only a dedicated handful.
-