The Texas AFL-CIO sponsored their First Biennial Texas AFL-CIO Political Conference at the Townlake Holiday Inn December 2-3. Unionists from all over the state studied together.

Legislative Director Walter Hinojosa reminded the group that the 2006 political year was already in progress. Candidates are filing, others are announcing their intentions. Hinojosa said, "There could be a significant turnover in the legislature this time around. What we do between now and November can make a tremendous difference in what that legislature is going to look like."

A key area will be Houston, Harris and the surrounding counties. AFL-CIO leader Richard Shaw sat in the front row. In an interview for KNON radio, he said that approximately 5,000 janitors, largely 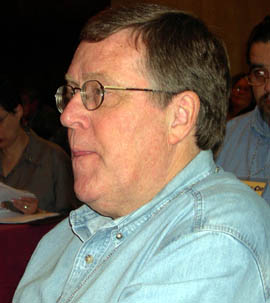 Latinos, are close to becoming part of the labor movement there. Teachers are organizing the 25 or so districts around Houston with considerable success, including within the district that Republican powerhouse Tom DeLay will have to run in during 2006.

Shaw thinks Democrat Nick Lampson could possibly beat DeLay. The district demographics are changing. Lampson previously had a small part of it. Shaw has a positive view of 2006 election possibilities in Harris County. He wants to do more with "Labor Neighbor," an electoral strategy that builds on union members within their own living areas.

Texas AFL-CIO attorney Rick Levy gave a session on unon money in politics. He said, "Business interests outspend labor interests by at least 10 to 1, probably even 50 or 100 to 1." Nevertheless, unions are much more closely watched and have more accounting hurdles than any other kind of election participants. 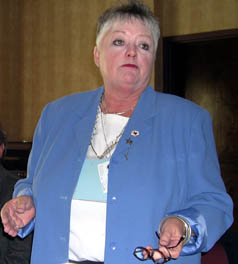 Secretary-Treasurer Becky Moeller asked everybody to sign up for political contributions to the labor movement through COPE.