Texas unionists gathered in Irving May 8-9 to select candidates for the November elections at their COPE (Political Education) convention. Texas AFL-CIO President Emmett Sheppard told the delegates, "Things are changing in Austin, Texas, right now." He said that word is coming from Washington that the Supreme Court may very well overturn the redistricting that changed the balance of the U.S. Congress. What kind of remedy they might impose was an open question.

All of the candidates for statewide office were invited. In the governor's race, 3 of the 4 sought labor support: Democrat Chris Bell and Independents Kinky Friedman and Carole Strayhorn. Friedman cracked up the convention with a humorous presentation. He said he was, "Too young for Medicare and too old for women-to-care." A panel of union leaders asked questions of each of the major candidates. Most of the candidates handled the questions easily and responded with the answers that union people wanted to hear, but the Democratic candidate for Land Commissioner had trouble with the question about "Right to Work (scab)" laws. The convention endorsed her Republican opponent.

Here are the convention's endorsed candidates:

In local races, the state generally goes with the recommendations of Central Labor Councils

Exciting workshops were part of the event. The convention also inducted some of our heroic older members into Labor's Hall of Fame. John Nash of Tyler was one of those chosen. 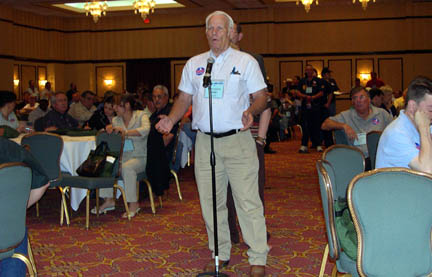 Nash is shown making a presentation during the discussion period