As October comes, American activists are asking how they can mobilize and integrate the anti-war sentiment.

The Washington DC anti-war march on September 24 was the first national action since polls began to show that the majority of the American people no longer support the war in Iraq. It came after dramatic change in the labor movement when the AFL-CIO, for the first time in history, passed a resolution against an ongoing war.

The march organizers said that there were 300,000 people. There would have been many more had not Hurricane Katrina taken so much of everyone's energy and if Hurricane Rita had not hit Texas on the same day as the march. The crowd was also diminished somewhat by a transportation failure in the Northeastern United States. Nevertheless, the action was sizable. It took our group 5 hours to complete a relatively short march route.

Despite their press coverage, anti-war demonstrators were no more than a few hundred. There were a lot of police, but they stayed back. The march was completely unmarred by illegal activities.

These Northeasterners may not have been completely serious about bombing us 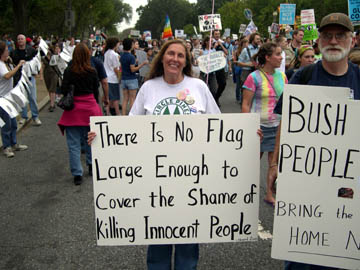 Almost everybody had hand-made signs with very original slogans 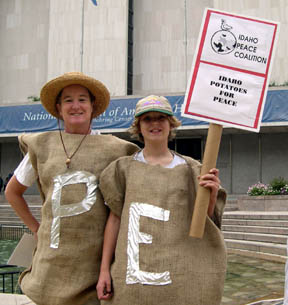 Most participants looked "mainstream" but there was a lot of originality, too