New Situation Must be Studied

Activists in North Texas Jobs with Justice knew that the immigrants' rights issue was going to become very important for all workers' rights, but nobody predicted the world-shaking changes that have come. Please attend the April 11 planning meeting at 6:30 PM at the UNITE-HERE office, 2639 Walnut Hill#203, Dallas 75229 so we can evaluate what has happened and plan our next moves.

At least 60 events were planned in major cities nationwide for April 10, many of them during working and school hours. Organizers in Dallas were able to get a lot of cooperation from the city and from the corporate media for a Sunday march after thousands of students had ditched school to protest congressional anti-worker proposals. The police estimated the Dallas crowd at 350,000 to 500,000. Our Jobs with Justice banner was proudly carried, even though most of our supporters were lost in the crowd. An early report from Houston indicates another historic turnout.

It is extremely significant that top African American politicians joined the Dallas march and held a press conference to urge more participation. Peace activists also joined in. In Austin and Houston, the AFL-CIO was listed among the central organizers. In San Antonio, several unions endorsed the march. Even though the corporate media has made it a best-kept secret, the proposals in congress would tend to diminish all wages and benefits, not just those of immigrants. 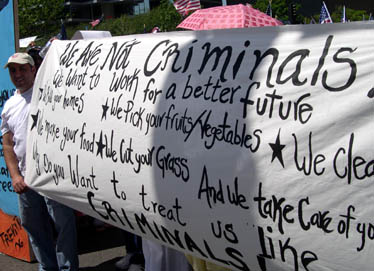 I have asked Representative Roberto Alonzo, a champion of civil rights, to join me on KNON 89.3 FM Wednesday from 8:05 to 9 AM to discuss the new situation and what needs doing next.

The questions you and I have to ask is, what next? Something historic has happened and it changed the battlefield, so which way do the warriors go next? I'm hoping the Jobs with Justice meeting on Tuesday night will help us figure that out. Hope you can come.

Please contact North Texas Jobs with Justice if interested in helping with this important work. After Jobs with Justice made our decision and began petitioning for fairness, we learned that we had boarded a fast-moving train. The Dallas Area Interfaith, the leading umbrella organization of religious groups in North Texas, had already scheduled a press conference favoring fair legislation in Congress. Click here for an account. We joined that press conference with our own Jobs with Justice statement. The statements of religious leaders were inspiring, particularly that of Lutheran Bishop Kevin S. Kanouse. We set up a panel to investigate the facts about immigrant's working conditions.

For updates about the situation in Congress, check the Catholic web site: http://www.justiceforimmigrants.org.