The excellent turnout at the Jobs with Justice fundraising breakfast on March 8 was easy to explain: there is a new sense of optimism and activism taking over America. It was more than evident from the voter turnout and the number of volunteers at precinct caucuses on March 4. People are looking for ways to be effective, and Jobs with Justice will suit them perfectly!

At least ten people came to the breakfast that we had never known before. Among them, as among the rest of us, were activists in unions and other organizations with great social concerns. A number of activists had taken it on themselves to sell tickets to the fundraiser. Diana, Margarita, Mireya, Sandra, and Rossia were outstanding. Brent, who is organizing the next fundraising activity, raised about $40 at the event and got several people started helping him. We'll wind this fund raising up on March 20, then make final decisions about the delegation to the National Jobs with Justice conference in Providence the next day. After March 21, the registration fees go up. We have agreed all along that the young volunteers have to be considered first. 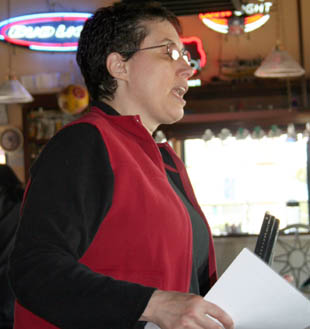 Elaine Lantz told us about International Women's Day and some of the great developments in the American labor movement. One of the great victories for American women came in the textile strike at Lawrence, Massachusetts, in 1912. Through a bitter winter and great suffering, the workers prevailed. But we do not remember that great strike primarily for the cold and suffering, nor for the victory at the end. We remember it because women put forth the slogan that workers deserve more than just paychecks, and that organizing can lead us to a far better life. Their slogan was "Bread and Roses," and it was put to a song.

When a state law reduced the work week from 56 to 54 hours, the Lawrence mill owners cut the workers' pay. Averaging only $8.76 a week, most of Lawrence's 30,000 textile workers walked off the job, and stayed out for nine weeks in a harsh winter.
The strike was remarkable for the cooperation among immigrant workers, for the role of women, and for the strikers' practice of expressing themselves in song. Some women strikers reportedly carried banners proclaiming "We want bread, and roses, too", symbolizing their fight for both subsistence and dignity. Thus the name, the "Bread and Roses Strike".
The mill owners and city authorities called out the state militia, jailed many strikers, and even planted dynamite to discredit the strikers and their union. The tide turned when police used force to prevent strikers from sending their children to sympathetic families elsewhere. Public opinion and a Congressional investigation forced the mill owners to give in to most of the strikers' demands.
For more about the strike, click here. 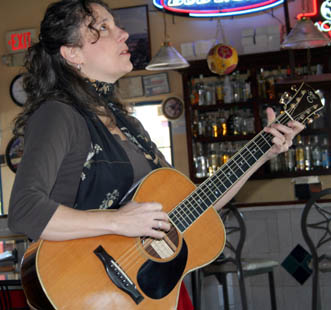 Lisa Markley, a member of the Musician's Union, gave the Jobs with Justice activists a live rendition of the famous "Bread and Roses" song. Here are the lyrics:

As we come marching, marching in the beauty of the day,
A million darkened kitchens, a thousand mill lofts gray,
Are touched with all the radiance that a sudden sun discloses,
For the people hear us singing: "Bread and roses! Bread and roses!"

As we come marching, marching, we battle too for men,
For they are women's children, and we mother them again.
Our lives shall not be sweated from birth until life closes;
Hearts starve as well as bodies; give us bread, but give us roses!

As we come marching, marching, unnumbered women dead
Go crying through our singing their ancient cry for bread.
Small art and love and beauty their drudging spirits knew. 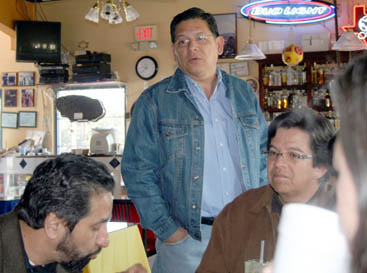 Our breakfast group also heard from State Representative Roberto Alonzo, who had just smashed his primary election opponent with 73% of the vote. Alonzo spoke, very fittingly, about the need to keep up the high levels of commitment that had been seen in the election period.

Alonzo was applauded for the great help he has been to unifying the progressive movement in North Texas, especially on worker concerns.

Our next meeting is 7 PM Wednesday, March 12, at Oak Cliff Methodist Church, 547 E Jefferson in Dallas. For the ins and outs about the JwJ national conference and our fund raising activities, click here.