Gobblelization and Fightback Are JwJ Subjects

On August 14, Nancy Hall, President of the Dallas Central Labor Council, gave her first "report back" on her labor delegation's trip to Colombia. A much longer report is available at http://blog.aflcio.org/2008/08/02/us-union-leaders-meet-champions-of-the-colombian-labor-movement/ It reports that 2,500 Colombian labor activists have been murdered since 1986. Only 82 convictions have taken place. This year, the number of labor activists killed stands at 35, but murdered teachers are not counted as unionists, so the statistics are underreported. 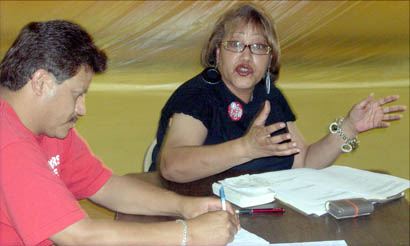 "I was concerned about my safety," Hall said, "But I was more worried about the labor movement in danger." She laughed, "Everywhere you look, there's someone with an M-16, and you don't know which side they are on!" On the first day, they stopped at the sites of two murders of mineworker activists.

But Nancy Hall did not dwell on the dangers of the trip. She seemed much more impressed with the solidarity that working people enjoy there. "The entire town came out for us," she remarked, then contrasted that to the low levels of support that U.S. unions get: "Such a difference!" Once, when a planned police escort suspiciously did not materialize, 100 workers escorted the U.S. delegation out of town. Everywhere the delegates went, they were received by friendly and supportive Colombians. The only exception was the U.S. embassy, which was the only place that banned their cameras and recorders, the only place that offered them no refreshments, and the only place where their concern for the safety of union people found no sympathy. The American embassy denied that such a problem even exists!

The Colombians knew a great deal about politics in the United States, and urged Sister Hall's delegation to try to make a big change in November. "Your president is too much like ours," they told the delegates. President Uribe, like President Bush, has a lifelong political history of opposing workers. Colombian workers also insisted that we stop the so-called "Colombian Free Trade Agreement" that is proposed by the Bush Administration. Nancy Hall said that this proposed treaty has no protections for workers or for the environment in either country.

The Colombians that the delegation met are striving to get workers from different countries to stand up for one another. "They really are trying to get global solidarity big time," Hall reported. She radiated enthusiasm when she said, "I wish everyone in America could go for just one day to talk to those workers!" She will be reporting again on KNON radio, 89.3 FM and www.knon.org from 8 to 9 AM on Wednesday, August 20. 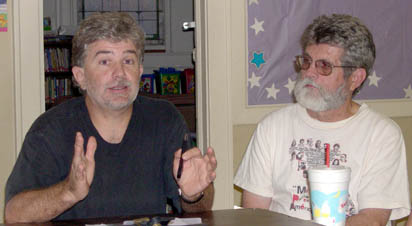 The Jobs with Justice activists wanted to continue questioning Nancy Hall, but they had to move on to other business. Dr. Joerg Rieger reported on his plan to establish an ongoing Workers Rights Board in North Texas. Essentially, the Board would consist of community leaders and experts in various fields that could investigate and evaluate problems of worker justice. They would be able to make recommendations and reports, as well as taking a firsthand interest in solving problems. A thorough description of the many successful Workers Rights Boards that exist around the country are at http://www.jwj.org/projects/wrb/history.html

Rieger and others will be contacting potential Board members at the same time that they invite community leaders to attend the Dallas AFL-CIO Labor Day breakfast. Most of the activists at the meeting signed up to go, but all of them could not afford the $25 fee, consequently, we will be trying to raise money. People can contribute at http://www.labordallas.org/join.htm or make checks to "North Texas Jobs with Justice" and send to Box 225822, Dallas TX 75222.

During the "Round Robin" section of the agenda, Rosemarie Rieger asked the group to endorse the Resolution for a Sweat Free Dallas. If the city passes an ordinance similar to the ones already in effect all over the country, then their textile and laundry services will pay decent wages and offer decent worker benefits instead of being "sweat shops." The resolution passed unanimously. The "Sweat Free Dallas" group will met next on Thursday, August 21, in Room 239 of Northaven Church, 11211 Preston in Dallas. They plan a much larger meeting with a national leader on September 13.

Kenneth Stretcher updated the group on efforts to get a "Living Wage" ordinance passed in Dallas. At minimum, his coalition is trying to get wages increased for the sanitation workers who work for privatized trash haulers. He expects a vote at City Hall near the end of September, and asks that everybody attend.

Antonio Huerta talked about efforts to develop solidarity with people of El Salvador. He said that their national elections will come up on March 9 next year and international observers are being sought.

Margarita Alvarez is working on a CD that will answer the common questions about undocumented workers.

Martin Ramirez, who seeks justice for construction workers employed by Great Western Erectors, reported on meetings they have had with primary construction company managers and with public officials. They have another delegation next week and need more community people to accompany them. It was pointed out that an ongoing Workers Rights Board will of much more help in future.