The United Labor Legislative Committee (ULLCO) sponsored a two-day legislative conference in Austin February 12-13. Turnout exceeded the auditorium seating space at the Texas AFL-CIO headquarters on Lavaca Street because so many of the reps registered late. Nevertheless, all Texas unions benefitted from the information presented and from the synergistic effect of working together. 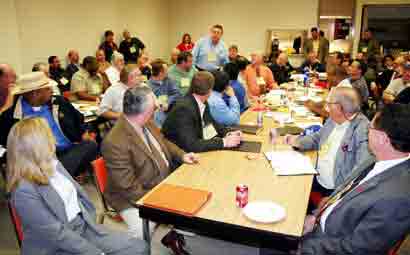 Several leaders of Central Labor Councils, including the dynamic Richard Shaw of Houston (standing) were present. Other participants were designated as legislative reps or top activists.

Working with the Texas Legislature tends to create a certain humorous attitude in those who understand the process. The late Molly Ivins made her initial reputation by reporting on "the only legislature we have." Texas AFL-CIO Communications Director joked that, "Nobody's life or property is safe while the legislature is in session." AFL-CIO President Emmett Sheppard speculated, "The legislature meets for 240 days every two years. Some people say that the people of Texas would be better off if they met for two days every 240 years!"

The roster of knowledgeable speakers started off with House Minority leader Jim Dunnam. Later speakers agreed with him that today's legislature, while still favoring big business, is not nearly as menacing as the last few. House Speaker Tom Craddick actually had a hard time getting re-elected, and Governor Perry was re-elected with only 37% of the vote. Labor's candidates gained 6 seats in the House. Dunnam said, "If anybody thinks that labor's efforts don't matter, they just don't know the state of Texas." Furthermore, "We have already identified 10 seats that we can take back next election!"

A lot of pending legislation is being disguised as something else. People who would like to destroy the public schools are using autistic children to get a voucher bill passed. They attached a bill to bust the constitutional cap on spending to another one giving a slight property tax decrease to senior citizens. Most of the proposals for "property tax relief" would end up "relieving" people with the most expensive homes in the state. The Governor is clearly posturing to try to gain higher office, possibly a Vice-President nomination. Dunnam commented on the present state of Texas workers' comp law: "It's a disgrace." "We still have a system that is just an insurance company doing everything they can to deny coverage to injured workers. We're supposed to fix it in this session and I think we will."

Teamster Ronnie Congleton, labor's single rep on the Texas Workforce Commission, made a strong statement against gobblelization: "When they call it free trade, it might be more like 'free traitor.'" As a veteran in solidarity with other veterans, he said, "I don't remember signing up to go fight so they could ship everything overseas."

Texas AFL-CIO Secretary-Treasurer Becky Moeller called the Employee Free Choice Act, at the federal level, "Probably the biggest challenge that we face." However, nearly all of the focus was on the state legislature that was in session just 4 or 5 blocks away.

One of the most interesting presentations came when Brian Graham explained the peculiarities of getting legislation passed through the Texas Legislature. His diagrams became drawings of spaghetti as he explained the infinite complications involved. One clear point emerged through it all: the Speaker of the House and the Lieutenant Governor (who runs the Senate) have tremendous power in Texas.

Attorney Rick Levy, a very popular speaker for union audiences, spoke on "Modernizing Unemployment Insurance." He said that the "Recipiency rate" in Texas is 24% while the national average is 43%. "Recipiency:" is determined by dividing the number of people receiving unemployment insurance by those who are actually unemploymed. Levy said, "We need to modernize our system and increase the recipiency rate." He also advocated legislation that would allow battered women to collect unemployment. Such women have to hide with their children in shelters and dare not go to work for fear of being found. Levy also pointed out that Texas remains the only state in the union that disallows unemployment compensation for union men and women who are "innocent bystanders" forced into unemployment by a strike in some other workplace. The issue came up when GW Bush was Governor and General Motors employees in Arlington were idled by a strike at a parts manufacturer in Ohio. Bush allowed the handful of scabs in the plant to draw unemployment, while the union members could not! 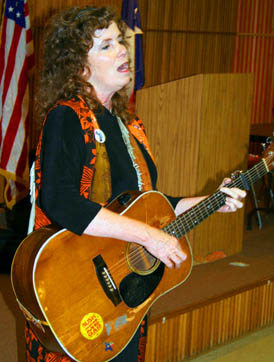 The AFL-CIO hosted a fish fry on the first evening. A number of state reps joined the unionists for the evening. Barbara Mallory Caraway, Terri Hodge, and Roberto Alonzo were among the North Texans attending. Union singer Anne Feeney provided entertainment to the packed auditorium.

Unemployment compensation, schools, honest elections, health care and workplace safety were top issues brought to the group by experts in their respective fields. Paula Littles gave the union reps an insiders' view of how to lobby for workers' causes, then we set out in teams, well informed and equipped, for the State Capitol.