The anti-immigrant / anti-worker proposals in Congress will get a strong statement of opposition at 6:30 PM on Monday, May 15, at the Tejano Restaurant, 100 W. Davis in Dallas. President Bush expects to explain his position on national TV beginning at 7 PM, and the group that stands for high wages and solidarity of the working class will issue its statement to local media immediately afterward.

Leaders held a planning sesssion on May 13 at Migueleno's Club. Representative Roberto Alonzo of MAD, Steve Dooley of ACORN, Domingo Garcia of LULAC, and Miguel Reyes of the April 9 Coalition were among the participants. They went over the situation in Congress, which still intends to pass legislation that would lower wages and divide our workers' movement. They looked at the local situation and decided to respond to Bush. So far, President Bush has announced his support for the draconian criminalization of HR4437 and added his own plans for indentured servitude (the spin doctors call the two proposals "enforcement" and "guest worker"). Bush may also call for military troops on the border to go with the 700 mile wall already proposed.

Domingo Garcia described a national effort for a March on Washington in September. It was stressed that the movement must reach out and include more than the millions of Latinos already in motion. Other immigrants, unions, and religious institutions would be greatly affected by the proposed legislation and must be included in future plans. Everybody who stands for higher wages and against divisiveness is encouraged to come to the May 15 meeting.

Speakers are expected to outline a plan of action. Video, photos, and speeches from April 9 are on megamarch.com. Virtually every worker who was penalized for following their conscience on May 1 has been re-hired.

Representative Roberto Alonzo said that a meeting of Elected Latino Officials is being planned. Domingo Garcia said that the Southwest Voter Registration Project will run an office on Jefferson street through the election period. Even though there are as many different emotions on this issue as there are people, the voter registration project is something that everybody should get behind! 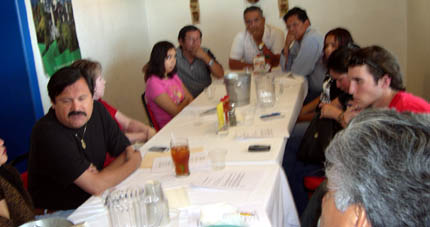