Dr Michael Phillips spoke about his new book, White Metropolis, at the Dallas Public Library on July 5. The book reviews the entire history of the Dallas area with special attention to civil rights. The evening was presented free by Democracy for America. When Phillips asked if anybody in the audience had recently worked on political campaigns, almost all of the 70+ participants raised their hand!

Phillips said that the concept of "race" was unknown before the 16th century, when Europeans began invading and occupying the territories of others, especially those in Africa and the Americas. The definitions of race have been very fluid, even up to modern times. As a matter of genetics, race is practically a meaningless term. 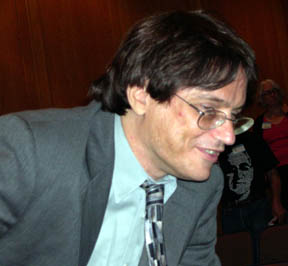 Until recently, a "creation myth" was the official history of Dallas. Once people begin to see what really happened, they can also see why those who run Dallas prefer the myth to the realities. "This is a violent, blood-soaked place," Phillips said, as he listed many of the statistics of lynchings here and around Texas. As for efforts to organize for progress, Phillips said, "There was actually a brutal war waged against unions in Dallas."

The repression in Dallas had a peculiar and very progressive side effect. Phillips talked about early efforts to educate African American children despite the worse possible conditions. He especially credited the long-time principal of Booker T Washington High School, John Wesley Paton, with developing a highly advanced program of Black Studies. Eventually, Dallas produced the most influential civil rights leaders in the state. Phillips told his audience, "Dallas was the epicenter of the civil rights movement in Texas!"

Unlike many intellectuals who content themselves with describing problems without offering solutions, Phillips said this of racism: "That is a collective sin, and it can only be corrected by collective actions."