On March 4, Congresswoman Eddie Bernice Johnson addressed a big crowd of unionists at the Communications Workers of America hall, 1408 N Washington, in East Dallas. About half of the 110 people were retirees, but many were activists with the Central Labor Council, which meets at the same site. Members of the NAACP also attended. 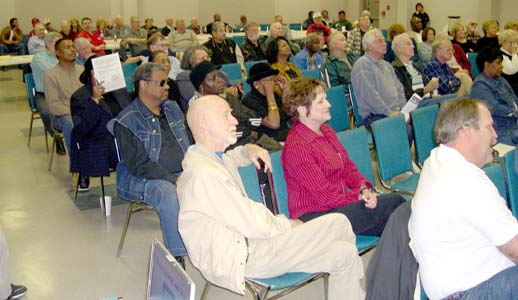 Johnson began with some background on the long fight for rights for retirees and disabled Americans. She said that President Truman had tried to get Medicare passed, but the fight wore on until President Lyndon Johnson was elected with a big Democratic congressional majority.

Several times, Congresswoman asserted, "There is no crisis in Social Security." She said that it could pay full benefits for the next 25 or 30 years without any adjustments. She said that a Democratic Congress had "tweaked" Social Security in 1983, and such minor tune-ups could be accomplished again when necessary.

The real problem, she said, is that President Bush has, "...buddies who are stockbrokers. That's a big pot of money they can play with. He would take $4-5 trillion so they could put it in stock market!"

Today, the government talks as if Social Security was an individual's money, but, "It was never intended to be a personal fund, it's a social fund."

Because her audience was largely union members, Congresswoman Johnson digressed into the general anti-worker policies of the Bush Administration. She said, "Every day there is someone up there [in Washington] that wants to do away with unions. We're in a battle for our lives, and the best thing we can do is vote heavily."

Dallas is very close to an environmental crisis. Congresswoman Johnson blamed that, too, on the Bush Administration. She said, "He is doing serious damage to the environment. About every other week we get a warning not to drink the water in DC!"

Congresswoman Johnson conducted her own survey of the problem and concluded, "What we found out is that he is picking people who agree with him to be on these boards." She said that scientists all over the world now distrust the conclusions reached by our government because Bush had been picking researchers based on previous agreement with his political positions.

The situation with TXI, a manufacturing facility located near Dallas, was a particular problem that the Congresswoman discussed. She said, "We have statistics showing more respiratory diseases, more deaths. Children can hardly play outside or go outside anywhere in Midlothian... It's not the government being mean to a company, it's about a company being mean to the people."

The Congresswoman said she had worked the last elections in all of the battleground states, and some of them more than once. The reason was clear: "This is the most anti-consumer, pro-corporate administration I have ever seen. I think it is the worst one in a lifetime!"

The battle against anti-worker legislation has now become focused on the fight to save Social Security. Congresswoman Johnson said, "We are holding town hall meetings everywhere we can because the word has to go out to the people." She said that 300 such meetings were underway. Democrats will not be presenting any plans for new legislation on Social Security, but instead, "We are going to talk about saving Social Security!"

She said that any plans to remove money from the system ultimately makes it less reliable. She then introduced Dr. Peggy Wildman, of the American Association of Retired People (AARP). Johnson concluded by saying, "They're on the right side of this issue."

Wildman, too, began, "There is no, no crisis, in Social Security."

She said that Social Security was invented as a remedy for a terrible depression that began with a stock market crash in 1929. She asked everyone to call their congressperson and demand, "We do not want privatization or personal accounts."

Congresswoman Johnson then fielded questions from the audience. Ed Reach of UAW Local 848 was first. He asked why people shouldn't pay Social Security taxes on their incomes that exceed $90,000/year.

The Congresswoman replied, "That has been discussed, it has not been received well." Another man questioned the very existence of the Social Security trust fund. Congresswoman Johnson said that the money is being accounted for, but, "You're right, the money is being used for something other than what it was intended. The entire tax break for the wealthy came out of it!"

A woman talked about the gross number of children without insurance in Texas. Another man proposed that big employers should have to match any tax money taken from workers to put into the stock market. He laughed, "That would kill the proposal in a heartbeat." Congresswoman Johnson added, "It is not intended to put any pressure on the people with money, it is intended for people without it."

She went on to say that President Bush has so far presented no actual plan. She said, "The President has not offered us a plan. All he's talking about is privatizing." She described the privatization scheme as "a hoax."

During discussion Cecile Johnson of the APWU invited everyone to another Town Hall meeting with the Congresswoman at their union hall, 2010 Postal Way in Dallas, at 10 the following morning. A Teamster invited everyone to their hall, 1007 Jonelle Street in Dallas at 10 AM Sunday. Congresswoman Johnson added an invitation to come to the Downtown Dallas Public Library at 6 PM Sunday afternoon for yet another meeting.

The meeting concluded with a short slide show prepared by the Alliance for Retired Americans (ARA). The Power Point Presentation is still available through this web page.