The Public Learns the Truth on Social Security

At the fourth of Congresswoman Eddie Bernice Johnson's town meetings on Social Security, a good number of progressive activists came to the main auditorium of the downtown Dallas library. Television cameras came as well, although the Dallas newspaper did not see fit to cover any of the Congresswoman's meetings.

The Congresswoman made clear her openness to honest solutions for long-term Social Security solvency: "We have a lot of wealthy people in Texas. We need them to pay into Social Security too, without a cap at $90,000." Later, in the discussion period, she agreed with a participant that raising the "cap" would be, "...the most feasible way to replenish the fund."

She said she would consider any kind of solution except privatization. 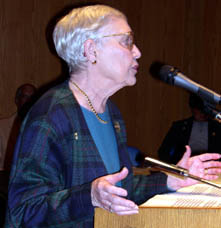 Mary Scott of the American Association of Retired Persons (AARP) added to the audiences' information bank. She said that the index change being proposed by some people would cut Social Security benefits as much as 40% by the year 2046. She pledged to fight privatization: "We will wage the fight of our lives..."

Activist Claude Watson, said that a lot of misinformation is coming out of Washington these days, but, "I am not calling anybody the l-word!"

Congresswoman Johnson said that the new rescription drug bill is "kind of a farce." Several times, she referred to the Bush privatization proposal as a "hoax." She drew big applause when she commented, "I think that people deserve a living wage!"

Audience members opined that Bush would not be able to convince people to support his privatization scheme, then he would give it up. Congresswoman Johnson cautioned them that the right-wingers in Congress use drastic measures to get their way. "I don't expect him to change his mind. He hasn't changed his mind since he has been in. It's like a car without brakes!" she said.

She said that it is very difficult for her point of view to find its audience through the media. She blasted the present Administration: "This is the most pro-corporate, anti-consumer administration..."

Johnson also commented on the serious problems we face in the environment. She said that new trade laws were being used to outsource jobs instead of helping American workers. She lamented corruption at top levels in the business world that goes unpunished. She said, "We must invest in our human resources." She especially advocated better schools.

Always, Congresswoman Johnson returned to the main problem at hand: "If they go into private accounts there's not going to be any Social Security. It is designed to destroy it!"